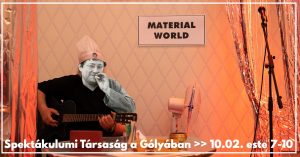 🔪 Our Spectacular Buffet is waiting for you with an abundance of dispossession!
The backbone of our events are the practices and methods developed by members of The Specacular Society: free exchange of ideas, drawing, associative text creation, movement and, of course, above all, having fun together.
🔪 Free program, donations accepted of course

—
What is the Spectacular Society?
An open group formed in the spring of 2022 in the Márai Cultural Centre in Budapest.
At our open soirees we approach the social spectacle, everyone in their own way, yet together.
The social spectacle as a phenomenon was introducted by Guy Debord’s “Society of the Spectacle” (1967), a fundamental inspiration for the ’68 movements. The work is a critique of the capitalist spectacle society and is more relevant today than ever.
We unfold the facets of being exploited in order to find a way out together.

Organised by Pneuma Szöv.
Supported by Budapest Józsefváros Municipality; You; The Bourgeoisie; Spirits of Dead Poets and Other Assholes