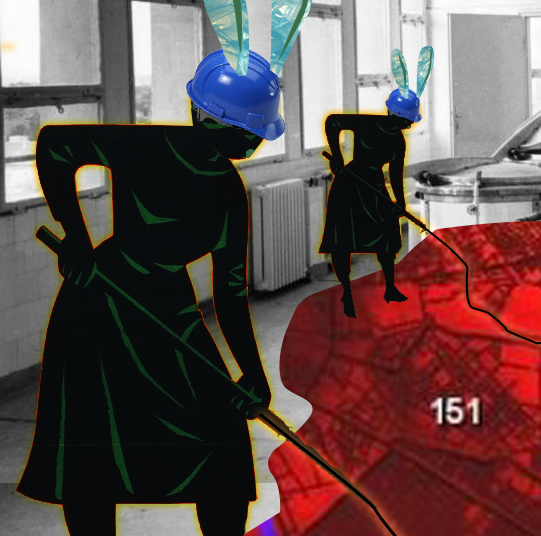 How are paranoias created today and how is it possible to alter the climate?
The Air Factory opened its gates in an abandoned and secret floor of the historical ‘Heinrich Udvar’ in Budapest’s 8th district for three weeks in October 2017. About 50 people formed over half a year an open community throughout the research process and finally realised 8 performances in Budapest and a smaller format in Bremen Spedition in February 2018.
Starting point of the research was the question how the original story of James Tilly Matthews from the early 19th century could be taken as a basis for reflection about today’s society. Matthews, patient Zero of diagnosed paranoid schizophrenia, had the illusion of secret Airloom Gangs controlling politics after the French Revolution with huge hidden influencing machines. The Air Factory is a journey through these themes actualised through the participants: politics of fears, quest for free spaces, gentrification that works against common culture spaces, consciousness about consuming habits (autonomous food,
transport chaines,etc.), conspiracy theories and fake news.
The Air Factory was an installative spatial performance, a community-based home-experiment, art research, meeting point and knowledge-sharing center. Visitors of the factory could participate in the ongoing work of the factory. They could dive into the interactive, immersive labyrinth-performance-
exhibition-workshops-roleplay by finding their own role, path and connections. They got a breath of fresh air and insights into the real and only conspiracy, the rabbit-hole…
The Air Factory was a revival and renewal of the Pneuma project LUFTHASE in 2008.

In the frame of OFF-Biennale Budapest

A collaborative artwork by Pneuma Szöv. and Ongoing Project  //// coordinated and initiated by: Pneuma Szöv.

Supported by the Goethe-Institut and a grant by Burning Man

Article on Air Factory by Júlia Salamon in Balkon